For someone looking to buy a new home in the Greater St George area, if unfamiliar to them it can feel like you’re taking a shot in the dark. For a lot of families the most important thing the parents consider is the school that their kids will be attending. As such, many may consider homes for sale in Crimson Cliffs new school boundary area.

Here in the St George & Washington area, the variety and quality of schools are abundant! They are seeing growth rates that the schools just can’t keep up with, so the clear solution to the communities problem is often to build a new school. In the beautiful and ever expanding area of Washington Fields and Little Valley a few of these newer schools have been built to take the brunt of the growing number of kids in the St George area, to include accommodating the new areas of development. This newest area could be so named after its middle and high schools called- Crimson Cliffs. 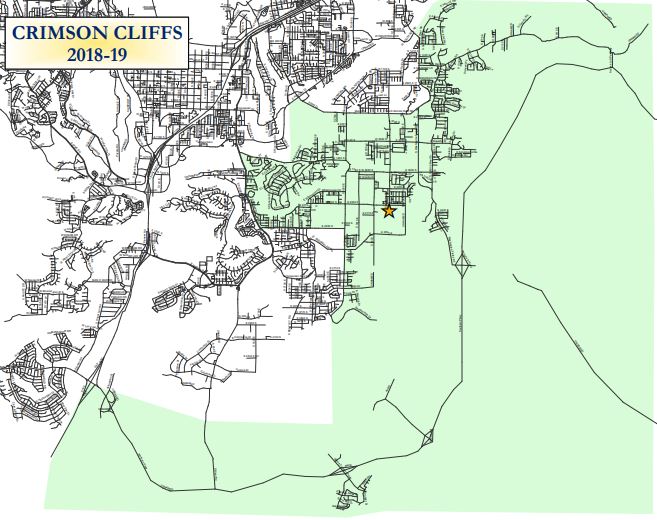 Of no small mention is the new Crimson Cliffs High School in Washington Utah, the most up to date high school in the area that can boast having three floors and the largest gymnasium for K12 schools in the area.

The school sits on 61 acres of land at 2000 South and 4200 East in Washington. Bud Mahas is the general contractor & Sunroc is the company that’s contracted to build the school. Sunroc quoted having used over 180,000 bricks to form the walls of the massive building.

Crimson Cliffs Middle School was built just a year before the high school. The Middle School opened up for the first time in August 2018. 600 eager students flooded the hallways. For 2019, the High School is planning on housing a total of 1000+ students. Both schools are built on the same campus.

The school district is taking extra steps to ensure that their students are as safe as possible. A new feature in both of the schools is a set of security doors, it’s to ensure that anyone who enters into the school must be checked in by the front office to increase security inside the building.

Most homes that fall in the Washington Fields area will be attending these new schools marked with a star in the map below above.

Recent Additions to the Washington Community

The recently built Washington City Community Center is a large recreation center that provides the community with a huge selection of activities, ranging from weight lifting, dancing, swimming, to skating. It even includes a Preschool for the kids to go to!

Washington Fields has the variety to impress anyone, even the traveler. Just barely to the south is the St George Regional Airport which can act as your gate to the rest of the world, or you can even take flying lessons.

FACT:  Based on the first 6 months of 2016, and the inventory at rate of sales, if no new homes came on the market, the time it would take ...Read More